SINGAPORE, March 29, 2022 /PRNewswire/ — A joint venture by four industry leaders from the in real life (IRL) event management, non-fungible token (NFT), digital creatives and blockchain spaces is set to create an evolutionary NFT – Zombie Max (ZMAX). The four co-founders, Arthur Lin, Rex Teo, Takahito Irie, and Zee Zheng coming together as TRX Labs aim to reinvent the NFT space by rewarding their NFT holders with a variety of rewards both virtually and IRL. They include the creation of a virtual Zombie Clubhouse that allows social interaction, a play-to-earn game where their own tokenomics (Energy Coins) will be rewarded to holders for steps taken in real life, as well as participation in physical events like Zombie Runs or SpaceX launch parties – supported by SpaceChain, the company which launched a crypto wallet into space to build a robust, secure, and decentralised blockchain infrastructure beyond the reach of any physical hardware hacks from Earth.

ZMAX’s NFT collections will commence with a 3D Zombie Pets Voxel series which will be launched in April 2022 over a stealth release as part of the ZMAX Genesis Series. Comprising 3,000 NFT art collectibles, these 3D voxels will be available for public sales (0.11 Ether) directly on zmax.io, and will grant purchasers priority access to the ZMAX ecosystem. The 3D Voxels, which are the Zombie Pets carrying the Zombie virus that have escaped and are spreading the virus to unsuspecting humans in the real world, are set to surpass the successes from the same team of creators who created the Mutant Ape Kids Club (MAKC) and Bored Ape Teen Club (BATC) series. The partnership with SpaceChain also means that ZMAX holders will receive airdrops when the International Space Station flies over the country – a unique feature that sets it apart from other NFTs. 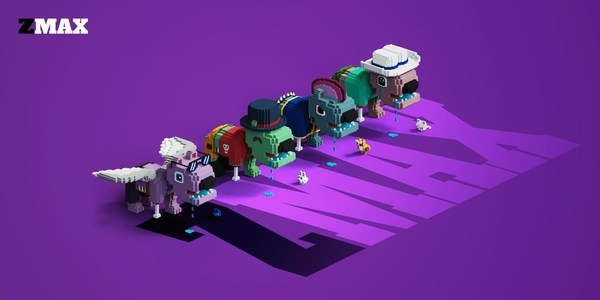 The ZMAX limited-release 3D Voxel Zombie Pets – part of the ZMAX Genesis Series – will be launched in April 2022, allowing its purchasers priority access into the ZMAX ecosystem and other IRL perks.

As the pioneer in bridging the real and virtual worlds, ZMAX is driven by its goals of users being active, social, and united – empowering individuals from all demographics to be a part of one of Asia’s first mega NFT collections while also enjoying the fitness benefits from their IRL activities. Unlike conventional NFT projects, ZMAX is a project from an NFT launchpad formed by industry leaders, trusted by venture capitalists, and supported by a board of advisors across various sectors – TRX Labs is set to be Asia’s lead NFT launchpad.

Arthur is the co-founder and brand owner of Run For Your Lives (RFYL), the original zombie run from the US that has seen over 300,000 players infected across 50 cities including Singapore, Kuala Lumpur, Bangkok, Sydney and Shanghai, Shenzhen, Hong Kong, Taipei and Jakarta. RFYL is a zombie-infested fun run that combines the flag-tag game concept and running.

Rex is the founder of Mutant Ape Kids Club (MAKC) and Bored Ape Teen Club. MAKC is one of Singapore’s most successful NFT projects which saw the debut of MAKC-M1 in December 2021 with 3,000 digital NFT collectibles on the Ethereum blockchain, and selling out within 72 hours. MAKC has since generated more than US$10million in revenue.

Takahito is co-founder and chief creative officer for the ZMAX project. He is a multidisciplinary artist working in myriad mediums including video, photography, digital illustration, performance and installation. Takahito was one of the Top 50 World Iconic Artists in 2013, and is set to bring ZMAX to new heights with his creative direction.

Zee is the co-founder and CEO of SpaceChain, and an advocate of integrating blockchain with space technology. SpaceChain aims to build an open-source blockchain-based satellite network that will allow users to develop and run decentralised applications in space. Recognised globally for launching five blockchain-enabled satellite payloads into space orbit, Zee has been at the forefront of blockchain and space technology developments.

TRX Labs is led by co-founders Arthur Lin (Founder of Run For Your Lives – Zombie Run), Rex Teo (Founder of Mutant Ape Kids Club & Bored Ape Teen Club), Zee Zheng (co-founder of SpaceChain) and Takahiro Irie (Top 50 World Iconic Artist 2013), industry leaders in their own spaces who are well-versed in blockchain technology, NFT space and IRL management of events. TRX Labs is a Singapore-based NFT-centric outfit that aims to become Asia’s leading NFT launchpad company with a vision to empower creators to launch their own NFT projects, providing them with backend support to achieve long-term sustainability.