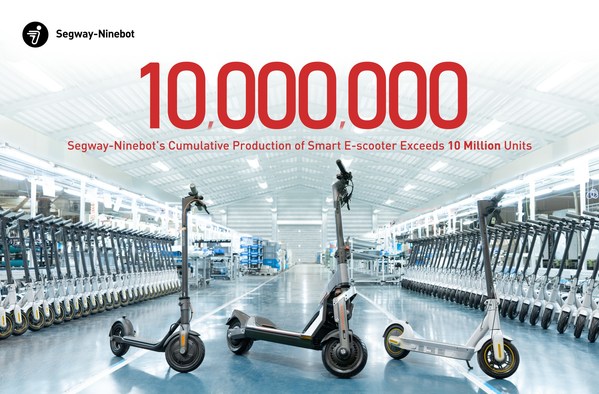 Segway-Ninebot’s growth into a global leader in the e-scooter sector is due to key decisions that were undertaken early on about the direction of the company’s R&D, along with the results of the comprehensive strengths of its product lineup, branding and business model. “Segway-Ninebot’s vision, to serve more than one billion people with innovative short-distance transportation and robotic products, is the original intent and driving force of our e-scooter portfolio. Electric scooters are also the inevitable choice for us to expand the tool categories and build out the portfolio in short-distance travel between 2 and 20 kilometers,” Chen explained.

The electric scooters market surged tenfold in the European and American markets in 2017 and has continued growing steadily since then. Data from Puyallup, WA-based report publisher QYResearch shows that the global production of electric scooters had reached 4.25 million as of the end of 2020. From 2017 to 2020, Segway-Ninebot’s compound revenue growth rate for e-scooters rose to 132.22%.

As a key component of the business model, the company not only rolled out top quality intelligent e-scooters through both online and brick-and-mortar channels, but also aggressively established a presence in the market by taking early notice of and catching the wave of popularity taking place in foreign markets for shared scooters. Early on, the company struck deals with several major shared micro mobility operators worldwide, providing them with a full set of mobility solutions from product to behind-the-scenes operation and management.

According to Nuremberg, Germany-based consumer goods industry analytics provider GfK, from January 2019 to February 2020, Segway-Ninebot ranked first in the electric scooter markets of Germany, Italy, Spain and other major European countries, while most shared electric scooter operators signed deals with the company as the exclusive or first choice supplier. Now, Segway-Ninebot has become a world-leading supplier of shared micro-mobility solutions by working closely with Spin, Voi and other likeminded players.

Meanwhile, Segway-Ninebot is also aggressively developing new products to meet the differentiated expectations of riders with “diversified” product strategies. Three categories, consisting of nine series, were created to meet the requirements for short commutes (3-30km), long commutes (30-60km) and high-performance rides (60-100km). The nine series include the light and fashionable E series, the “comfort-first”, science-driven F series, and the reliable and practical G series, among others.

In terms of innovation, the company is always looking at new technologies and adjusting its approach based on the latest tech and scientific advancements. In a move to deliver a better cycling experience to riders, Segway-Ninebot co-developed vacuum inflatable tires with several partners by leveraging i-Sealing technology. The resultant tire not only delivers higher durability and safety, but is also immune to blowouts or leaks even when driving over an upright nail. Furthermore, the company’s e-scooters deploy a steel-pipe frame for higher stability and reliability. A proprietary battery safety management system provides double protection against short-circuits, overcurrent, overcharging and overdischarging in tandem with other safety features, assuring the safe operation of the batteries.

Not to be overlooked is that since Ninebot acquired Segway, the power of the brand has been further enhanced, while the global product portfolio has been expanded. Internal resource sharing since the acquisition has effectively improved the comprehensive advantages of the scooter lineup. Results from over 1 million pieces of customer’s survey and feedback show that Segway-Ninebot optimized the user experience for riders, which has been further empowering the digital platform. Benefiting from its large scale and dominant market share among international markets, the company has achieved cost control, joint development, massive supply and agile response through supply chain optimization, increasing product reliability while reducing costs.

To date, the company has production facilities in Changzhou and Shenzhen, with the annual production capacity of smart e-scooters reaching 4 million units, ensuring stable product supply to global markets.

“Now that the milestone of 10 million units has been reached, the company will continue to improve product life and service, while continuing in its efforts to further promote the development of the industry,” emphasized Chen.

The Segway Super Scooter GT series, a top product in the electric scooter category that was just released in March, was also showcased at the event. The Segway Super Scooter GT series (GT 1 and GT2) have built a reputation as the supercar of the electric scooter world, with a top speed of 37.3 mph (in US market) and 43.5 mph respectively. The GT1 hits 30 mph from zero in 7.5 seconds, while the GT2 does so in just 3.9 seconds. These are not only more than enviable numbers for the daily commute, but also more than meet the expectations of players seeking an extreme experience with their ride.

Segway-Ninebot is a global enterprise in the fields of intelligent short-distance transportation and service robots. In 1999, Segway was established in Bedford NH, US, which is the world leader in commercial-grade, electric, self-balancing personal transportation. Ninebot is an intelligent short-distance transportation equipment operator integrating R&D, production, sales, and service, established in Beijing, 2012. As Segway and Ninebot completed a strategic combination in 2015, Segway-Ninebot came into being. At present, the company’s businesses are all around the world and have subsidiaries in Beijing, New York, Seattle, Los Angeles, Dallas, Amsterdam, Seoul, Paris, Barcelona, Munich, Shanghai, Changzhou, Shenzhen and Hangzhou, selling products in more than 225 countries and regions. With its world-renowned intellectual property, Segway-Ninebot will create more products that will lead users and the entire industry into the future.