Jelenew makes the first cycling pants with an external pad with the moulage technique. Female cyclists may have a comfortable and healthy cycling experience.

WILMINGTON, Del., May 7, 2022 /PRNewswire/ — Female cyclists could expect a whole new riding experience. On May 17, the new website of Jelenew, an American female cycling brand, will launch. As its core product, the first cycling pants truly made for women in the world by Jelenew will be launched simultaneously.

Jelenew breaks through the attraction of traditional cycling apparel and launches new products that lead to a revolutionary item：the world’s first 1+1 cycling pants with external pads, one pair of leggings, and one pair of shorts with a detachable external pad. Some professionals believe that Jelenew cycling pants with an external pad are an innovative product. It is developed and designed according to men’s and women’s differentiated physiological structures and feelings. Its “like nothing” comfort and unique high-end sense redefines female cyclists’ cognition of professional cycling clothing, setting off a wave of attention to women’s needs from body and mind to the outside. 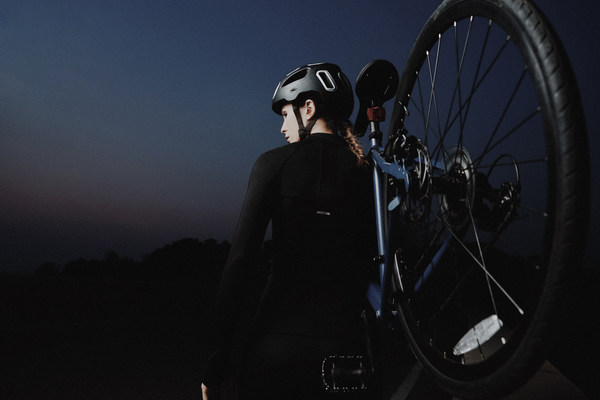 “In a 2019 study of 178 female cyclists published in the Journal of Sexual Medicine, 58% reported at least sometimes experiencing genital numbness, and 69% said the same about chronic butt and groin pain. Many friends tell me that wearing women’s professional cycling pants is like sitting on a huge, thick diaper, stuffy and bloated. And a strong front protrusion I can feel when standing. It’s very embarrassing.” Jelenew’ s creative director said, “Many girls blame themselves or cycling for this discomfort. Using properly constructed cycling pants can reduce or eliminate these discomforts. We want to change this situation. Jelenew hopes to use new structures and technologies to bring a better experience to female cyclists.”

Historically, the population of male cyclists was much larger than that of women. Male cyclists have become the mainstream consumer in the cycling industry, while the entire market industry ignores female cyclists and their demands. All cycling apparels have the same pattern, and in other words， women had to wear the same pants as men. It wasn’t until the mid-1990s, as women’s consciousness awakened, that women’s cycling pants—reduced-size, optimized-cut cycling pants—appeared.

In recent years, with the further development of female cyclists’ awareness and the gradual expansion of the female cycling consumer market, many cycling brands have tried to actively develop new women’s cycling apparel from the perspective of women. Some brands optimize and adjust women’s cycling pants in terms of waist-to-hip ratio, leg length, and built-in pad structure according to the differentiated structure of men and women. But no brand has ever made a breakthrough, and almost all brands use the traditional male, in-seam built-in pad structure. Essentially, most women’s professional cycling shorts are shrunken versions of men’s.

The reporter learned that Jelenew is a brand born for women, and the innovation revolution of women is the core of the brand. By collecting many women’s feedback, Jelenew integrates functionalism and 3D structural aesthetics as the product guidelines. It injects the innovative experience of haute couture 3D clothing structure tailoring, ergonomic design, and sports wearing expertise into the research and development of cycling wear designing.

Jelenew cycling pants are based on the analysis of the 3D structure of the human body and the disassembly of the muscle force data during the female riding process. The external pad adopts the original three-segment V-shaped structure, thickened at the ischium and pubic position, and the V-shaped vertex position is vacated, focusing on protecting the buttocks and pubic junction of stressed women. It provides more precise support than a built-in structure cycling pad, helps maintain average blood circulation, and reduces the risk of numbness in the perineum, crotch, and legs when riding. The ingenious integration of the smooth and excessive design of the G1 to G2 surfaces makes the external pad far fitter than the built-in riding pad, reducing the friction of the perineum. And it also solves the problems of sultry private parts and bulging of the private parts of traditional cycling pants, embarrassing lines, camel toe, etc. The detachable setting breaks through the limitations of sports scenes and meets the diverse needs of cyclists.

“Finally, I found the professional cycling pants for women.” A French cyclist said after trying the Jelenew cycling pants, “Cycling is an essential part of my life. My sensitive parts would feel acupuncture after riding. Jelenew’s cycling pants gave enough support and cushioning, and riding became a pleasant enjoyment. So amazing! And there’s no need to worry about the pad bulging or slipping, and you can go for a walk or have afternoon tea without changing clothes after cycling. This is something that I had never imagined before. I hope more female friends can feel these comfortable and magical cycling pants.”