Filipino tycoon Mr. Necisto U. Sytengco has been an exemplar of excellence in his long career in enterprise building. His work principles of proper preparation, effective execution and continuous improvement have allowed him to maximise opportunities that others would have missed. 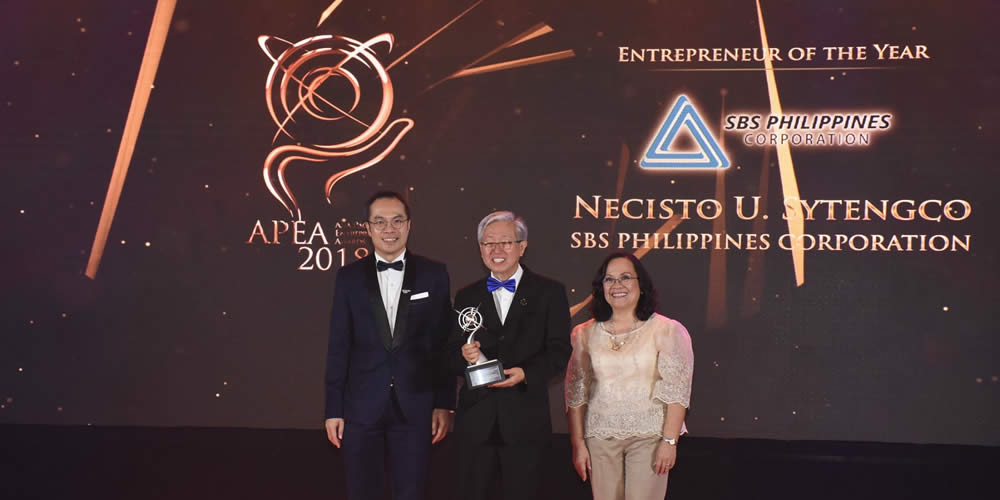 In 2018, the founder and chairman of SBS Philippines Corporation made it to Forbes’ Philippines Richest List. The magazine estimated his net worth at $180 million, making him the 41st richest man in the country. He was also conferred the Entrepreneur of the Year Award at Enterprise Asia’s by-invitation only event – the Asia Pacific Entrepreneurship Awards 2018.

In this article, we provide a brief overview of Mr. Necisto’s life story, as well as advices from him on how to lead a successful life.

Affectionately called Nestor by his friends, his professional life began at the tender age of 17 with the sudden death of a family member, which thrust upon him the enormous responsibility of running the family insurance business. Unperturbed by his own youth, he saw this as an opportunity to improve the business. Without any formal business education, he managed and strengthened the business, now called Swan Insurance Agency Corporation.

In the 1970s, encouraged by his experience in the insurance business, Nestor set his sights on creating something new, particularly in chemicals and electronics spare-parts trading. Setting up this undertaking presented the major challenge of finding a credit line to fund this business. Nestor was unabashed as he reached out to various friends and contacts, where he occasionally received responses of rejection. Steeling his heart, he forged ahead until he found the initial funds needed to start the business.

The establishment of SBS Merchandising as a trading company in Sta. Cruz, Manila became a watershed experience for Nestor, paving the way for subsequent growth and expansion. The growing need for electronics spare-parts and chemicals among local and foreign-owned integrators and manufacturers validated Nestor’s efforts, as both the industry and the trading business grew steadily through the years.

Striking the iron while it was hot, Nestor did not idly wait for opportunity. He set up dedicated and strategic distribution and warehousing facilities to better manage the flow of materials, gain economies of scale and secured a more leveraged cost structure. This aggressive preparation contributed to a distinct competitive advantage as it allowed SBS Merchandising to purchase at larger volumes, effectively enabling it to take advantage of volume pricing while expanding its range of products at the same time.

Looking back at his experience, Nestor shares that “to move in step with the ever-growing and globally connected economy and market, it was essential to further strengthen our business and improve our competitive position for the continued growth and future success of the business.”

Through the years, Nestor’s exceptional talent at recognising what clients needed allowed the company to build strong supplier-customer relationships with many leading manufacturers. The company expanded to serve the chemical requirements of high-growth markets such as food ingredients, agricultural and animal feed raw materials, pharmaceutical and cosmetic products, and veterinary care. The growth and success of the company led to SBS Philippines Corporation going public in August 2015.

As of 2017, SBS Philippines Corporation recorded profits of PHP 101.3 million from gross revenues of PHP 1.1 billion. It was also the 104th biggest firm as of end-December 2018, with market capitalisation of PHP 11.6 billion. SBS Philippines Corporation today distributes more than 3,000 chemical products that are warehoused in more than five locations the Philippines. The company also serves over 1,000 companies and individuals.

“I don't have holidays,” the entrepreneur replies as he described his day-to-day life as a businessman. Currently, he is overseeing over 50 companies with the help of his children. His other businesses include stock market trading, an insurance agency, and importation and distribution of construction materials.

Another Side of Mr. Necisto

Despite all his success, Nestor remains modest and even seems to be unaware of the scale of what he has accomplished. His children talk about how Nestor would jokingly refer to his nervousness before every big business transaction—holding out his hands and showing them how shaky these were. At heart, his humble disposition challenges us with his core belief that we should always be better prepared, and that there is more that each of us can do to see through the successful execution of whatever we prepare for.

As the current Chairman of SBS Corporation, Nestor often encourages his employees to work as if the company belonged to them; to work on maintaining a constant standard of excellence; to continuously grow and improve; and be better at serving one’s customers.

While Nestor is certainly adept at recognising business opportunities, he has also been gifted at taking on humanitarian ones. He established Sytengco Foundation, Inc. to address various needs in the communities the corporation operates in such as Health, Education and the Environment.

The foundation donates generously to government hospitals such as the Philippine General Hospital, as well as to programmes of the Philippine Cancer Society, and disaster relief efforts in the Philippines and abroad. Furthermore, regular tree-planting activities in order to help educate its communities about the importance of preserving the environment.

Nestor holds by the quote of “All problems are man-made problems. All man-made problems have man-made solutions”. He believes that all problems have appropriate solutions, and continually motivates everyone to persevere in finding those solutions. Nestor’s personal value system has positively formed a company culture of constant improvement amidst business climates that are constantly changing. “In a world wherein everything is fast-paced being just in time is not enough,” he says. There is a need, he adds, “to accelerate our transformation towards the future so that we can reach new heights.”

The journey is far from over for Nestor, who sees himself continually taking an active role towards streamlining the company’s business processes to be more prepared to seize emerging opportunities. Living by the core beliefs that have guided him in business and in humanitarian work, Nestor will ensure that SBS Philippines Corporation, and the Sytengco Group of Companies, continues to succeed.