DeepBrain AI to Debut AI Studios at the 2022 NAB Show 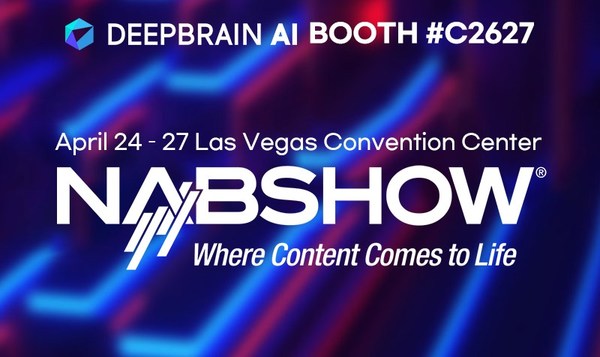 With a multitude of streaming services and social media channels, both production studios and content creators are under increasing pressure to create video content faster and more cost-effectively. The AI Studios platform, now available in beta release within the US, streamlines the video production process by utilizing state-of-the-art AI video synthesis to create videos with ultra-realistic Virtual Humans. DeepBrain AI’s core technologies enable Virtual Humans with natural movements such as lip-sync, hand gestures, and overall mannerisms. AI Studios provides an intuitive user interface with a true “script-to-video” production process and enables drag and drop backgrounds, user-uploaded images, and customized text. The result is a broadcast-quality video created in seconds and without the need for cameras, lights, crew, hair & make-up, etc.

AI continues to transform every industry it touches, and broadcast media is no exception. Already available within Asia, broadcast news stations such as Arirang TV in Korea and CCTV in China use DeepBrain AI’s Virtual Humans, known as AI Anchors, to augment the regular newsfeed with AI specials, breaking news, and hourly updates throughout the day. “I will just write up an article, and she (Virtual Human) can deliver it right away,” stated Moon Connyoung, Principal News Anchor and Managing Editor at Arirang News.

The video synthesis technology from DeepBrain AI has applications across many different industries, including media, banking, education, and customer service. “DeepBrain AI’s solutions have already been deployed at banks, retail stores, and TV stations across Asia. I am excited to bring our technology to the US and the 2022 NAB Show,” stated Eric Jang, CEO of DeepBrain AI.

DeepBrain AI will provide hands-on demonstrations of the AI Studios platform and details on how to create your very own Virtual Human at the 2022 NAB Show. Interested parties can visit DeepBrain AI at booth #C2627, or they may contact DeepBrain AI at https://www.deepbrainai.io/en/contact/.

DeepBrain AI is recognized as an industry leader within Artificial Intelligence as it applies to video synthesis and Virtual Humans. Founded in 2016 and headquartered in Seoul, Korea, the company has offices across Asia and North America and continues to push the envelope to deliver on the promise of Humanizing Digital Interaction. For more details, visit https://www.deepbrainai.io/en/.

About the NAB Show

NAB Show, held April 23–27, 2022, in Las Vegas, encompasses media, entertainment, and technology and is the ultimate marketplace for those seeking to create superior audio and video experiences. From creation to consumption across multiple platforms, NAB Show is where global visionaries convene to bring content to life in new and exciting ways. For complete details, visit www.nabshow.com.